Creature Capture is a tile-matching puzzle game based on Star vs. the Forces of Evil. It was made available to play on Disney XD's official website on March 3, 2015.

The current version of the game has fifteen playable levels.

"Star's creatures have escaped from her tower dome! Use Star's wand to match creature colors and help Star and Marco zap all the creatures back into the tower dome before they are overrun."

The gameplay is similar to the arcade video game Puzzle Bobble (also known as "Bust-a-Move"), except it is played on a horizontal axis instead of vertically. The player controls Star Butterfly and must clear the screen of critters by shooting colored spells from the left side of the screen to the right.

Fired spells travel in straight lines and can bounce off the top and bottom walls of the screen. If a spell touches critters of the same color, forming a group of three or more, those critters—as well as any critters and objects hanging from them—are removed from the screen. The color of spells fired can be changed freely (if the player has available spells in that color) by clicking on the spell before firing.

Once every few shots, the critters will advance from the right side of the screen to the left by one row (this is indicated when the critters become angry). If the critters reach Star and Marco, or if the player runs out of shots, the level ends in failure.

The objective of each level is to clear all the critters away before they reach Star and Marco. Based on how quickly the player clears a level, they are given a 1 to 3 star rating.

When critters are cleared away from the screen, they occasionally drop additional spells or cupcakes, which must be picked up before they vanish. Spells add to the player's available number of shots, and cupcakes are used for special monster skills.

In certain levels, critters and monsters team up with Star and Marco to clear the critters away. Each monster has a unique special skill that is activated by clicking and holding on the monster during play. Each use of a special skill costs one cupcake.

Levels 11 through 15 also feature two new spells: Portal, which sucks all critters and objects on-screen back into the dome; and Starfall, which picks critters to send back to the dome at random.

The game awards the player achievements for certain actions that are taken during the game: 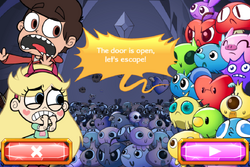 Retrieved from "https://starvstheforcesofevil.fandom.com/wiki/Creature_Capture?oldid=111396"
Community content is available under CC-BY-SA unless otherwise noted.