Star vs. the Forces of Evil Wiki
Register
Don't have an account?
Sign In
Advertisement
in: A to Z
English

Star vs. the Forces of Evil

Star vs. the Forces of Evil

I'm from Another Dimension

Star vs. the Forces of Evil is an American animated television comedy produced by Disney Television Animation for Disney Channel and Disney XD. The series had a sneak peak premiere on Disney Channel on January 18, 2015, and it officially started on Disney XD on March 30, 2015.[3][2]

The show was created by Daron Nefcy (former storyboard revisionist for Wander Over Yonder), the first woman to create a show for Disney XD and the second to create a series for Disney Television Animation. Dave Wasson serves as director and Jordana Arkin as story editor, while both also co-executive produce the series.

Star vs. the Forces of Evil is an animated comedy adventure that follows fun-loving magical teen princess, Star Butterfly, who — after a few bold skirmishes with other-worldly monsters — is sent by her Royal Parents to live with the Diaz family on Earth, bringing along her own unique inter-dimensional style to her new planet. With the Diaz's teenage son Marco by her side, this foreign exchange student from another dimension embarks on new adventures battling evil villains throughout the multiverse and in high school, all in an effort to protect her powerful magic wand which she is still figuring out how to use.

Daron Nefcy originally came up with the idea of Star and began pitching it to various television networks when she was a junior in college. The idea remained in her mind over the course of six years, and while the character of Star stayed the same, the show kept evolving and evolving.[5]

When she originally pitched the show to Disney, Star was a grade schooler who believed that she had magical powers, albeit it just being in her head. However, an executive suggested changing Star into a teenager with real magical powers. After feeling that she failed pitching the idea to SVP of Original Series Eric Coleman, Daron retooled her pitch, which resulted in Star becoming a foreign exchange student from another dimension with a magical wand. It took a year for Daron and her team to create a pilot, and two more years to create the first season.[6]

Kevin Johnson of The A.V. Club gave the pilot episode a B+, saying that the show was something children could have a lot of fun with, noting how the show follows current trends in Western animation "towards large-eyed characters and quirky visual trends". Johnson stated that Star vs. the Forces of Evil "excels on wild, silly, and clever set-pieces to bring the laughs and action", but expected that adult viewers won't get much out of it.[10] Furthermore, the premiere of Star vs. the Forces of Evil became the most-watched animated series debut in Disney XD's history, according to Variety.[11] In 2016, Star reached over 100 million consumer views combined across Disney XD's media platforms.[1]

In reviewing episodes from the first season, Marcy Cook of The Mary Sue described the show as a blend of others such as Invader Zim and a sanitized Ren & Stimpy, with great appeal to tween and teen girls as well some laugh-out-loud moments for adults. Cook praises the show's appeal, "stylised and distinctive artwork", and main character but criticizes its occasional inconsistencies in characterization and episode quality.[12] Caitlin Donovan of Epicstream listed Star among her top 10 animated series of 2015. She found the first few episodes to be "a little rough for me, like the show was trying too hard to be funny and weird", but that the show got better with character development and relationship building, with "a really dramatic, high-tension finale to the first season".[13]

A shot from School Spirit in Star's promo. 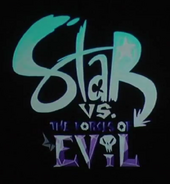