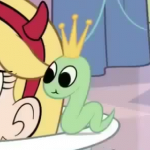 Star vs. is just about my favorite show. I've watched it since the first episode aired on Disney Channel back in January 2015 and I have been following this wikia since the hiatus between seasons 1 and 2 when I was wondering when the next season would come out (that hiatus seemed so much longer than it actually was :)).

I'm a Starco shipper (it's my OTP), and I'm not sure when I started shipping it. All I remember is that it was before Interdimensional Field Trip when I felt surprisingly annoyed when Marco sat with Jackie on the bus (don't know why that had such a huge effect on me). However, I'm accepting of all other ships in the series (I was fangirling so hard when Tom and Star were holding hands in Demoncism).

I suppose I'm a relatively unusual Star vs. fan, because I really like Pony Head. She may be an obnoxious weirdo, but that's what makes her so funny and great (lol). Also, I've always had this strange disliking of Meteora. I don't completely understand it, but it is starting to lessen through seeing the teenage Meteora and her interactions with Mariposa in Gone Baby Gone. I also strangely love Gemini. He's sweet and adorable. I don't completely understand why, but I do.

Season 1: Blood Moon Ball (my absolute favorite; I think I have almost every word memorized lol), Banagic (Star just behaves so cutely in this episode and it's so Season 1 with all the antics), Sleep Spells (Princess Smooshy is the best), and probably most of the other episodes in this season lol

The Smurfs (my overall fave)

Unikitty (because, why not)

My Little Pony: Friendship is Magic

When they come out, I will probably watch Pixie Girl

Also, in case you are wondering, my username comes from my favorite channel, Teletoon Retro, which is now defunct.... Rest in peace, Teletoon Retro (lol)! You will be missed (by me).

Retrieved from "https://starvstheforcesofevil.fandom.com/wiki/User:TeletoonRetroGirl28?oldid=183988"
Community content is available under CC-BY-SA unless otherwise noted.